This short story appears in our Spring/Summer 2019 issue. The entire issue is available for purchase in print or digital format.

On Sundays I wind the clock and it is not simple. In fact the first part is often hardest: fitting a brass socket over each of the two knobs recessed in the face of the clock – which is the same height as my own face, like a mirror. This step is challenging because of age. My hand trembles. Aligning the socket can take as much as four minutes, dozens of attempts. But I would sooner stop breathing than cease my winding, and I will do both things soon enough.

What does this mean? By and by, satisfaction will come for certain. Some people seek speedy answers, but I believe time rewards all who show patience.

The left knob hoists the counterweight that propels the pendulum, the right one lifts the counterweight that rings the hour. As I crank, clockwise of course, the weights rise inside the grandfather’s dark interior. Afterward, I place the winding socket on a little wooden shelf inside the cabinet. I ease the door closed, another week is accomplished, and I am free to think about death.

How could I not, in the presence of an object that has outlasted so many of its owners? When this timepiece makes a noise to mark each passing second — a sound not unlike the word “clock” — declaring with steady mechanical indifference that time marches and marches and does not care? Also, in case you were not paying attention, each hour a cheery chime provides a reminder that you have idled away another sixty minutes of your precious allotment of finite quantity, and was it well and gratifyingly spent?

Any man past seventy who says he does not contemplate mortality is simply using words to drown out the ticking that keeps him awake at night. The dark will find him nonetheless.

But there is love in the device too. My parents gave this clock to one another for their twentieth wedding anniversary. I remember their excitement when it arrived.
—

STEPHEN P. KIERNAN has had more than four million words in print, the product of decades in newspaper journalism, two nonfiction books and three novels, most recently The Baker’s Secret. His work has won more than forty awards, appears in numerous translations, and has been acquired for film and television development. He lives in Vermont. More at: https://www.stephenpkiernan.com/ 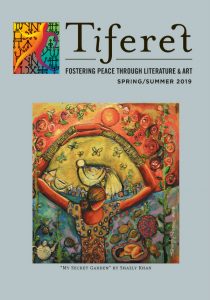 March 26, 2020
0
The following poem appears in our Spring/Summer 2018 issue. Purchase this issue in print or digital format to read the rest of Christopher’s poem...

February 29, 2020
0
The following poem appears in our Fall/Winter 2019 issue. Purchase this single issue in print or digital format. How to fix what hasn’t come yet? Start with the anguish of...