Home Blog Post Excerpt from a review of Jacqueline Sheehan’s book The Tiger in the...

The following review by author Ellen Meeropol of Jacqueline Sheehan’s book The Tiger in the House appears in our Spring 2017 digital issue.

The entire issue is available for purchase and digital download. 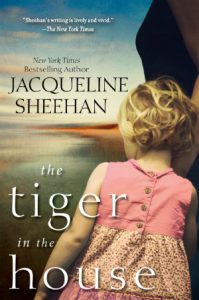 Driving home from dinner, a couple comes across a five-year-old girl in a faded princess T-shirt standing on the side of a gravel road. The girl is alone, smudged with blood, sucking her thumb, and will speak only her first name, Hayley. Police find three bodies in a nearby farmhouse, apparently the victims of heroin trade violence. This scene begins Jacqueline Sheehan’s chilling sixth novel, The Tiger in the House.

Southern Maine Foster Services assigns Hayley’s case to their most experienced social worker, even though Delia has given notice and has only thirty days left on the job. She plans to leave the career she loves, but can no longer live with, and open a seaside bakery with her younger sister, Juniper. Delia and Juniper carry their own childhood trauma related to their beloved schizophrenic father and the early loss of their parents. Delia has deeply researched the hereditary risks of father’s mental illness and monitors closely for any hint of malignant voices in herself or Juniper.

But their father left the girls more than a genetic time bomb.  He was a syndicated food columnist who bequeathed his culinary powers and passions to his daughters. Juniper, nicknamed J Bird, believes her talent with muffins and éclairs is related to “her full frontal love of food alchemy and how it restored the soul, how it had saved her time and again since the death of her parents.” Delia has an unusually sharp sense of smell. “Your sister has the nose,” an Italian pasta maker told Juniper. “She can smell anything, that one. The semolina opened up its secrets for her.” Delia is the baker. “Bread was something she wanted to get right. There was so much about foster care that was never going to be right, a patched-up lifeboat for some kids. Within her own family, there was no going back, no extraction process of the gene that had caused her father’s schizophrenia. But with the bread, she felt a kind of absolution.”

Jacqueline Sheehan, Ph.D., is a New York Times Bestselling author. She is also a psychologist. Her novels include, The Comet’s Tale a novel about Sojourner Truth, Lost & Found, Now & Then, and Picture This, The Center of the World, and The Tiger in the House. She writes NPR commentaries, travel articles, and essays including the New York Times column, Modern Love. She edited the anthology, Women Writing in Prison. Jacqueline has been awarded residencies at Hawthornden Castle in Scotland, Jentel Arts Colony in Wyoming, and at Turkey Land Cove on Martha’s Vineyard. She teaches workshops at Grub Street in Boston and leads writing workshops in Jamaica, Guatemala, Wales, Ireland, and Scotland. www.jacquelinesheehan.com

ELLEN MEEROPOL is the author of three novels, Kinship of Clover, House Arrest and On Hurricane Island. A former nurse practitioner and a part-time bookseller, Ellen is fascinated by characters balanced on the fault lines between political turmoil and human connection. Recent short fiction and essay publications include Guernica, The Writer, Cleaver, Necessary Fiction, and Writers Chronicle. Ellen holds an MFA in fiction from the Stonecoast program at the University of Southern Maine. She is a founding member and the current board president of Straw Dog Writers Guild. http://www.ellenmeeropol.com/