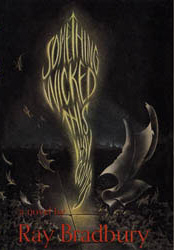 Dust-jacket art by Gray Foy from the first edition

Something Wicked (and Wondrous) This Way Comes

When Melissa Studdard first graciously asked to me to write this guest post, of course I was thrilled. However, when the topic of who has most influenced me as a writer sunk in, I hesitated with the thought that this would be a difficult piece to compose. There are so many writers who have had a profound impact on my own written works.

Being that I am a purveyor of both poetry and prose, one could well assume that I would gravitate to like-minded writers. It is true that in general those who have excelled in both poetry and prose have most influenced my work. Many of the Transcendentalist period writers fall under this category for me. Exemplary and double-duty writers like E. A. Poe (who referred to Transcendentalists as those “Frogpondians”), Henry D. Thoreau and Ralph Waldo Emerson are obviously at the top of my list.

Subsequently, once having made this most difficult of decisions, I realized it was a more contemporary writer/poet who inspired me above all others. It was then that I told Melissa, “There is one outstanding writer who has most influenced my own writing, and that is Ray Bradbury.”

A number of years ago, the very first essay I wrote on my blog was a homage to Bradbury. I added an accompanying video of a 2001 keynote address titled “Telling the Truth” where Ray shared stories about his life and his love of writing at The Sixth Annual Writer’s Symposium by the Sea. I was profoundly affected by his lecture. Over the years I have listened to and read many other remarkable talks on writing by Ray Bradbury. Each time his words have resonated deeply in me, and then set firmly into my writer’s marrow.

Ironically, soon after my conversation with Melissa, the world lost the great Ray Bradbury, about whom Aldous Huxley once remarked, upon reading his prose, “You, sir, are a poet!”

Bradbury is one of the most endearing and influential writers of our times. His phenomenal collection of essays, with connecting passages, Zen in the Art of Writing: Releasing the Creative Genius Within You is a must read for anyone truly committed to effective creative writing. Bradbury’s seminal works have reached every corner of the globe. They have been adapted for film (he wrote the screenplay for John Houston’s classic film, Moby Dick); further widened our perspective on the inherent evil of censorship (Fahrenheit 451); and led us onto other worlds (The Martian Chronicles). There are many more exceptional novels by him, such as The Illustrated Man and Something Wicked This Way Comesthat have left an indelible mark on the world.

Bradbury’s characters are so deftly written, it is as if we have always known them, intimately. His writing flows as smoothly as a gentle rain off a copper cupola. The list of wordsmiths who have also so effectively accomplished this literary feat to me would include iconic word weavers Charles Dickens, Mark Twain, Harper Lee and Edgar Allen Poe. What excellent company Ray Bradbury now joins in legend and literature!

I once had the honor of having a letter I wrote handed to Ray Bradbury, via a mutual friend, during Ray’s 90th birthday celebration at his home in Cheviot Hills, California. I could not force myself to add my return address to that letter, but was told that Ray had read it and then asked that his appreciation for my congratulatory words be conveyed to me.

Needless to say, I will never forget that day. Nor will I ever forget Ray Bradbury, our preeminent writer and poet—the man who I feel I know, intimately, through his characters—the writer who I have had the absolute pleasure to read and from whom I honed my own writing craft.