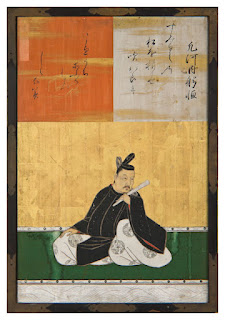 Ōshikōchi no Mitsune
painted by Kanō Tan’yū
This week’s posting will again serve a dual purpose. In addition to announcing the new Mnemosyne poem, I’d like to also introduce the form, tanka, so that we may memorize both the poem and the form together. Most people are familiar with haiku, which is based on syllable count, rather than rhyme or other poetic elements. You could say tanka is haiku’s less popular cousin. And like haiku, tanka is based on syllable count. In fact, tanka IS haiku, with an added, unrhymed couplet. So, the pattern is this: 5 lines, syllable count 57577. That’s it, easy peasy.

What follows below is a beautiful little gem of a tanka by Japanese court poet Ōshikōchi no Mitsune (859-925). This poem was translated by Helen Craig McCullough.

Note: If you’re new to the blog, you might want to look at the first Mnemosyne Post to find out what this project is all about.

I must pause to gaze
before crossing the river.
Though they fall like the rain,
leaves dyed in autumn’s colors
will not make the waters rise.
http://melissastuddard.blogspot.com/2012/06/mnemosyne-weekly-poem-sixteen-oshikochi.html