As I step off the train into the flow of foot traffic, wheeling my unwieldy suitcase behind me, I am keenly aware that I look like a tourist. Yet, this is my city; the sounds and smells are as familiar to me as ever; the exhaust fumes and warmth generated by hundreds of bodies welcome me home.

I join the herd of commuters and visitors climbing the stairs from the platform to the lower concourse, and I can hear jazz music being played on a keyboard: Gabriel Aldort leans forward into the microphone and his husky voice fills the room. It takes me a few beats to realize that he has switched to a Billy Joel song. I picture the album cover in my mind, and lean against the pillar to enjoy the melody and the memory.

He takes a short break to chat with a transit cop, and I round the pillar to get a closer look at his set-up. His keyboard cover, open on the floor in front of him, is quickly filling with singles and a few fives. There is a photo of an infant, and next to it a sign indicating that he is an MTA Arts for Transit musician.

A woman moves over to make room for me on the bench, and I sit to savor my coffee and several songs. He is better than any musician I’ve heard playing in train stations. Grateful for his music, which has transported me from Grand Central Station to the bedroom of my teen years, I raise my phone to snap this photo: 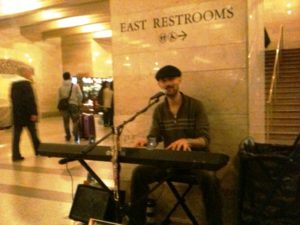 He nods slightly and then moves into the bridge of Elton John’s “Your Song.” This is not the city I remember. Like Gabriel’s music, it is an improvement on the original.