Gayle and her fellow teachers–Mildred Barya, TJ Dema, and Jumoke Sanwo–were so moved and inspired by the women and the poetry they produced that we wanted to share some of their work.

Grace Athauye Sharra received second place in an Africa-wide poetry competition, the only woman on the continent to place.

May the voices of Malawian women continue to blast forth into the world. 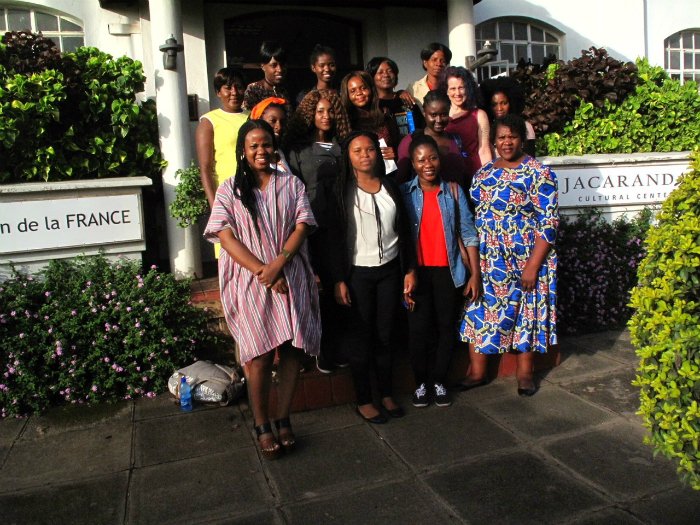 When I was a little girl,
my aunt took me into a dimly lit room
and instructed me to “pull”
the first quarter of my life was dedicated to modifying my body for the pleasure of man.

I am a young woman
I am not seen, only picked apart
the vendor in the street yells ” sister, thako limenelo mutenga nalo matendatu!”
an online ad says I need a waist trainer
even he picks the pieces he loves and lays them gently on his bed
and stuffs the rest of my body under the mattress.

When I get married
my husband will fiercely write “mine” on my ring finger
and place his last name on my head like a crown.
My child will bloom in my body
crawl out and be nurtured by it.

So, I am rebelling.
I cover myself in tattoos and pierce my tongue,
belly
hell, even my nipples
I refuse to squeeze and tuck in the pieces you despise
I am reclaiming my body.

We lose the people we love we become poets. We fight battles
no one knows about, we use the blood to write poetry.

HOW SHALL I SING? by Grace Athauye Sharra

How shall I sing in this foreign land
Full of despair and scorching sand?

My tongue clings to its roof
Afraid to compromise the truth

How do I feel at home in hell
Or smile behind this dark veil?

WILL YOU COME by Grace Athauye Sharra

Will you come
And tend to your farm?

It now lies neglected
And even from a distance looks neglected

And some mice hunters
Set it ablaze

NOTHING LASTS FOREVER by Agatha Malunda

Got stung by violent bee
And now tears of honey
Succulent taste in my eyes.
What a loss to invest in love
My heart burdened by huge costs
That is to be paid by both.

Such had been our order of life
Only I offered you my shoulder
When sorrow was a bother.
But when it rained in my eyes
You found shelter in another man’s arms
Leaving me alone in the cold.

I’M A RABBIT by Matilda Phiri

Comfort me with love
I’m witty rabbit.
I’m a bright rabbit
Clever like a witch
My favourite food is grass
Give me grass to munch on
I remain and eat grass whole day

Silence! Considered golden
Park entire self, retire to sleep
Silence awaits your bedroom
Save for breathing and dreams
For years you’ve been silent
Condemn silence to death

Silence! Command for discipline
Whoever silences you, think twice
No chance for complete silence
Open up! Speak out, be engaged
Warm you to slothful sleep
Release silence to casualty

Silence! High time, speak out!
Whoever you force to silence
Will get surprised by screams!
Unlock silence, speak your mind
Rise up, shine gold and silver
Subject silence to strapping halt

Silence! No longer at ease
Force forces you to be silent
Rise up unzip your mouth
Shout! I will until last whistle
Long fought battle is won
Send silence to parking

Silence! No place in me
Whatever crop sown to silence
Will be recipe of seed decay
Win against sheer silence
Trample on it bury silence
Unwrap silence to garbage

Silence! Now lost the case
Whoever harboured silence
Has become very confused
Strive towards silence breakers
Optimism to forge ahead
Unfasten silence to voice out

AT HOME by Luckier Chikopa

Muli bwanji?
Humanity is our breath
Laughters of our men pa bawo
Whispers of women in admiration of there men
Folktales being told by our a gogos          oooh How great is to be part of this home

My thumbprint covers Burundi on the map.
Lake Tanganyika’s splashes cool the hot town
cobbled with traces of UN.
There is an NGO for widows
across the hotel that serves the best steak.
Poverty is a boat on Lake Tanganyika,
sailing like a boomerang from The Congo.
The Black Market inflates
like a fish blowing bubbles.

words disappear in the currents of your breasts
history is stirred in the rhythm
of your ripples
in the restlessness of your nipples.

the foam that covers you
is the dribble and spit
from our babies. They float above you
searching for un.written.forbidden.stories.
stories of She -Uganda

how does a song tiptoe on your waves?
how do blind people sail at night?
will your sandy shores ever grow old?
will your story ever be told?

Margherita’s peak
wobbles between your thighs
the forests are the brows
that cover your eyes
you balance the rain between your colourless teeth
and still you remain
…………….speechless……….

our nightmares shall tell your story
of how you fed the warring troops
from fish floating in your vagina
of how presidents hid in the crevice
of your armpit.

They told you not to tell their story.
Our dreams shall tell your story.

This is a BBC postcard poem, presented during the 2014 Commonwealth Games in Glasgow

My thought centres around motion, the art of moving,
I begin to ponder about the earth as it remains still under my feet
with each step pushed to new ways of engaging my space.
We are constantly in motion as beings,
can be static or sometimes in-transit but we move to feel alive.
I further engage in more thoughts about my continent Africa,
In the words of the great singer Enrico Macias
I have carried my country and my continent Africa right there in the soles of my feet.

Mobility lingers in our thoughts,
Motion remains an illusion fuelled by our ideas and relation to space.
We do not move when we take steps as we are made to believe.
Activity does not equate movement.
We gather momentum when we push an agenda to completion.
That is a call to action.

Circular motion allows us to be part of a globe without upsetting the balance,
Aligning ourselves to feel the rippling effects of machinations and indiscretions,
We challenge the sickness that accompanies our motion.
We seek to find the equilibrium like a planet about to exit the galaxy…
We struggle for gravity.

A lot has been written about the continent
Many wonder how possible it is to set sail centuries ago and not leave the harbour?
We analyse our predicament in the context that constantly shifts,
Like a mirage, our ideas remain an illusion maybe because we are in motion, in translation.

In the year of the locust invasion people began to eat barks. It was all they could get. The rest of the plants and gardens were bare. Women chased after the locusts with pans. But a stranger appeared and warned them not to eat any. Then he was gone. Meanwhile, the people were starving, and the barks were mostly bitter.

The first man to die lost his mind, and the second and third. The first ran around his yard, naked, and the children cried, ayee.

The stranger returned holding entrails in his hands and said since they had not obeyed his words, everyone would die. He advised them to hurry to the coffin maker so when death struck, they’d be ready, waiting in their coffins. He also said they should get a griot to write tomb inscriptions so that the generations to come would know how their ancestors had fared.

For two days the coffin maker was the happiest man. He had never made so much money! He built everyone the kind of coffin they wanted. Expensive plywood, mahogany, ebony, mature oak. He charged exorbitantly for the special orders.

On the third day the people started to get into their coffins. To his horror, the coffin maker was the first to feel a fever, and then a chill that made his spine tingle like a caterpillar dancing. He felt acute pain in his neck and temples. Heaviness inside his forehead caused him to grimace. He realized he wouldn’t have any use for the money, and he hadn’t even made for himself a marvelous coffin.