and his guest Kelley White

PASSION OF THE FIRST ASCENT

What have I got against wisterias,
hacking away at them
as they round the corner,
find the downspout,
and ascend skyward,
leaving brown curlicues
to dangle from the shutters
when the leaves fall
and snow collects my mind?

How deep will my knuckles
sink into
this luscious May loam

over the impatiens
bed mudding in
these red seedlings of fire.

Jon Wolston lives in Providence, RI, and maintains a poetry blog at
www.jonwolston.wordpress.com. You can reach Jon at jnotslow1@msn.com.

Dr. Wolston was first struck by poetry in the speech of his psychiatric patients and by the power of such found moments to create intimacy. He explored his findings with colleagues at the National Association for Poetry Therapy, and began publishing online in 2004. His first collection, Paradise Root-stock, appeared in 2008 from Stonington Publishers. Pulled In to Providence his second collection was published in the spring of 2011. His work has been anthologized in The 2010 Poets’ Guide to New Hampshire.

so somewhere in the middle of my marriage
I turned to Tuchman’s distant mirror
as if I knew the story on the cover.

I sought to read the flaming dance
of death, of king and courtiers
aflame, but couldn’t find the tale, just dull

economies and hints of a man in pitch and flax—
looking tarred-and-feathered funny
(but my mother said the victim died,

tar peeling flesh like flayed Sebastian)
or was that Lawrence, no Marsyas, yes,
but he was a myth, a satyr and no saint,

or was it my own personal myth I wanted
to read, pest house, five brothers turned
to pitch-pine by fire, their pitch on my own

caressing hand? What drew me to Poe’s
Hop-Frog, his masquerade, royal orangutangs
chained to the chandelier, the dwarf escaping?

Or was it all part of the masque of the Red
Death? Black Death? Yellow fever? Hairy old
orange man orangutang at the city

zoo under burlap and cardboard scraps,
vent man in a tree—and did he burn
in that Christmas Eve fire? Odd to think

of tropical disease here in New Hampshire, of all those burning
wild men, hairy men, and beside me in bed
a man unread, cold to my touch— 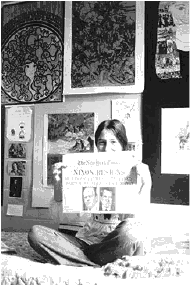 Pediatrician Kelley White’s poetic opus is informed by decades of practice in both inner-city and rural settings, and has appeared since 2000 in a variety of journals including Exquisite Corpse, Raffle, and JAMA. Garrison Keillor read her poem “Pandora” on The Writer’s Almanac in January 2007, and in 2008 she was recognized by the Pennsylvania Council of the Arts. Her two most recent books are Toxic Environment (Boston Poet Publishing) and Two Birds in Flame (Beech River Books.)

POETRY
CORNER by silent lotus … MAY 2010

Faith is like a Shimmering Veil – by Jane Beal

Will You Be My Mother?