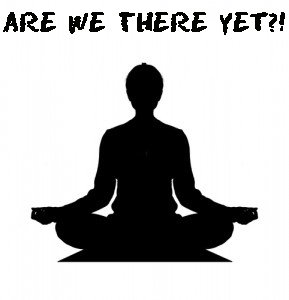 In December, friends offered to host a four day, mostly silent meditation retreat at their mountain home. For a modest fee, they’d provide lunch, snacks and facilitation; we could bring breakfast and dinner if we chose to sleep there. Unlike a formal retreat, where the same people sit for the entire duration, participants could come for all or part of it.

Yes! shouted my heart. I registered and paid.

The December following my father’s passing in 2003, I sat my first, week-long silent retreat at Elat Chayyim, a Jewish center on the East Coast. Upon arriving, I erupted in tears. Upon leaving, I felt lighter, as if some of the heaviest grief had lifted. Silence in community is powerful medicine, and since then I’ve retreated more or less annually. Later, my interest in Buddhism brought me to the Zen Monastery Peace Center in California a few times. But my retreat practice fell away after returning from my pilgrimage along El Camino de Santiago in Spain last fall, relocating to Boulder and rebuilding my life. That this retreat was just a 20 minute drive away made it a huge gift. That it was happening on the heels of a move to a better living space felt like divine timing. As I packed my suitcase and prepared food, I imagined it would be a relaxing and contemplative way to end 2013.

The first morning of meditation blasted those imaginings through the multi-storey windows that grace their dwelling. I had forgotten that when I sit for longer than 20 minutes, my mind sets off on its own Camino: rather than walking 20 kilometers/day, it generates at least 20 thoughts per minute. And it wants me to run alongside like a reporter chasing a soundbite. I tried to slow it down.

I repeated this mantra silently but my mind insisted on dissecting, again and again, a very short-lived romantic situation that had recently ended. I deepened my breath and redirected my attention to my body. Kneeling on my folding meditation bench, I noticed pain in my left knee, a mild burning along the tops of my thighs and tension in my neck, echoes of that first week on the Camino when every muscle and joint, unaccustomed to the task, screamed in protest. I knew my body would eventually adjust to the longer sits, 40-50 minutes each, just as it had figured out how to walk 20-30 kilometers/day with a backpack but without much fuss.

Could I just hang in there?

In Zen tradition, meditators maintain the same erect, seated posture no matter what (even if mucus pours from the nostrils, or worse!), to train a person to not immediately react to what is arising. Still, I shifted my position to take pressure off my knee. I felt like I was cheating until I reminded myself that, on the Camino, I had frequently tightened or loosened the straps on my pack to achieve minimum discomfort. Maybe pain didn’t always have to be the teacher.

Along the trek, I often cajoled my aching and weary self into walking to the next village by bribing it with the prospect of a chocolate croissant or other goodie upon arrival. My body, still addicted to sugar, rallied. At this retreat I reminded myself that lunch awaited after the three hour morning session of sitting and walking meditation. No flaky croissants, but food nonetheless. I refocused on my breath and tried to ignore my mind, as agitated as an overloaded washing machine during the spin cycle. My body complained: my heart pounded; my fingers fidgeted; my low back twinged.

Could I bring as much curiosity and even delight to these roiling sensations as I had to Spain’s rolling landscapes?

In that moment, the answer was No. But that I could even consider the question was progress, of sorts. I kept my eyes downcast and softly focused on the red wool throw rug in front of me, the equivalent of the yellow arrows that guided my 870 kilometer pilgrimage. Since this home offered stunning views, I was tempted to drink in the scenery during meditation, too, not just during the breaks. Basking in nature’s beauty is joyful but can sometimes be a way of bypassing my internal experience. Cooing over Basque sheep comes more easily than feeling fondness for my quickening pulse, my tender knee and a tumultuous heart.

When we paused for lunch that first day, I was as hungry as if I had covered 10 kilometers even though, slowly circling the room in sock feet during walking meditation, we had barely moved. Attempting to harness my attention for three hours felt as strenuous as trying, and failing, to lasso a steer. If the longest journey is truly from the head to the heart, at that moment I was still lacing my boots. Wanting the equivalent of that chocolate croissant, I greedily chose the seat at the dining table that offered the best view.  As I tried, and failed, to mindfully eat my meal, I laughed at myself for having forgotten that silent retreats are, in fact, noisy internal confrontations. There is nothing peaceful about facing off with a mind and an ego that is constantly comparing, judging or jumping off cliffs into bottomless pools of “what if”s. The term ‘spiritual warrior’ is not a joke: the mind can be a tricky and treacherous foe, masquerading as our friend while sabotaging our best interests at every twist and turn.

After lunch, I unpacked my suitcase in a bedroom shared with another retreatant. The spare elegant, treetop room offered plenty of space and light, fresh bedding and pillows, without the soul disturbing squeaky bunk beds and lumpy mattresses of the Camino. By the time two o’clock rolled around, I was ready for the afternoon sit. Or so I thought. My mind roared, blood pulsated in my veins, a cramp invaded my left foot. The tea and snack break, scheduled for 4pm, could not come soon enough. Bowls of raw nuts and chocolate coated berries beckoned from the kitchen counter. Oh, screw it, I thought, as I reached for a few dark chocolate covered cranberries, despite having sworn off sugar on my personal blog.

During the final 40 minute sit before dinner, a kvetch arose from my swirling mind: Are we almost done yet?

On the Camino, when only two or three kilometers stood between me and resting for the evening, I often coaxed myself along with a song. Alas, in silence, I needed a different strategy. Kneeling on my bench, I tried not to think about how much time remained before we could move; stand; EAT! I zeroed in on my breath, subdued to a ragged whisper. When the leader struck the metal meditation bowl for the final time, the sound reverberated in my ears like gentle waves washing ashore. My relief rivaled that of arriving to the next albergue, ditching my backpack and taking a hot shower.

That first night, sleep apnea due to the higher altitude kept me awake for all but a few hours. Stumbling out of bed in the darkness to shower before the 7am sit reminded me of hurrying from the albergues each morning. I wanted to have the trail to myself and pay homage to the sunrise, a daily tonic that soothed the rattling effects of chronic, fitful slumber. As we sat in silence, the rising rays slowly illuminated the meditation room and I remembered how nourishing it is to both welcome the day and witness its full arc. Noting both sunrise and sunset helped me settle down and slow my mind to maybe 10 thoughts per minute. By the final day, despite being sedentary, I sensed that I had traversed a considerable distance. Once again, I had wound my way back to the narrow, somewhat overgrown trail leading to my heart.