We must never relinquish the vision of a humane society and a humane world.
Kjell Magne Bondevik

When you relinquish the desire to control your future, you can
have more happiness.
Nicole Kidman 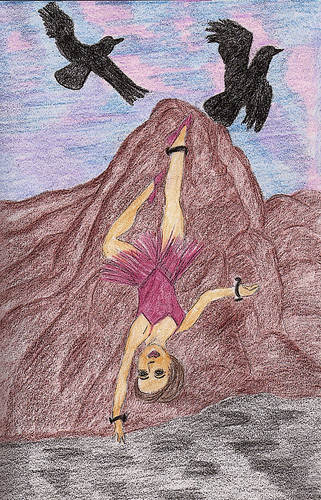 A woman hangs upside down, tied to a cliff face. She is helpless and has no power to right herself, shape her life or control her destiny. All she can do is wait for some force, outside herself, to rescue her from the pull of the abyss beneath her. It is hard to imagine what transgression has resulted in this fate.

The woman’s one free leg is of little use. It seems that she might use her free toes to free the other leg, but such a struggle would just as likely lead to more tears. It is possible that she feels wronged and likely that she feels utterly abandoned. The circling birds are not visibly helping redress the situation. Quite the contrary,they appear to be leaving. Perhaps, upon seeing her plight, they are in flight to rally support. Whatever! She is going to need to be patient if she is to be righted and have her head, the seat of reason, in its rightful place.

In the meantime the woman needs to have a degree of acceptance and count her blesssings. Each day, Prometheus was tormented by Zeus’ eagle as it tore at his immortal flesh and tried to devour his liver.
There are no angry eagle’s soaring, targeting her liver. However, it is clear that any struggle would prove futile and lead to exhaustion.

Most of us could not endure this fate. Yet, mysteriously, she does appear to have some acceptance of this fate. Look at her repose. It has a graceful quality about it. This is surprising. It is hard enough to witness the predicament, let alone find oneself in such a place. It is disturbing to see her head like this. Likewise it is difficult to comprehend that she could have a facade of calm.

Perhaps an explanation is that as she dangles in this state of suspension the woman actually accepts her fate and is tapping new reserves. It does seem that, within her stillness she has relinquished all sense of control and is willing to bide her time, wait and find out what it is that will support her. If this is the case her action, as compared to the inaction of suspension, must be interpreted as a sign

Being in a state of suspension is not easy for anyone. As creative beings there is a tendency to feel that if we are not in full control and taking direct action, we are not accomplishing anything. Yet, the

reality is that there are times when we need to hang in the suspended state of the Hanged Woman, get out of the ‘head space’ and, in doing so, suspend some of our preconceived ideas and expectations of ourselves and others. Jung said

“For the unconscious always tries to produce an impossible situation in order to force the individual to bring out his very best. Otherwise one stops short of one’s best, one is not complete, one does not realize oneself. What is needed is an impossible situation where one has to renounce one’s own will and one’s own wit and do nothing but trust in the impersonal power of growth and development”.

Perhaps he is right. As the women hangs she may well be awaiting rebirth and transformation. And, it is the perfect time for quiet contemplation and meditation.

If you find yourself in the position of the Hanged Woman, or can simply relate to her state, take the time to visualize a sanctuary

Close your eyes and make yourself comfortable. Imagine yourself in a state of calm suspension. You are in a beautiful natural setting, one that holds great appeal to yourself. You might be swimming with a dolphin in aquamarine waters, sitting by a river in a quiet glade, perched high on a mountaintop or skipping through a meadow of golden wheat. You could be under the ocean or on another planet. Wherever it is make sure that you feel comfortable. Contemplate a shelter that you might build for yourself, consider encasing yourself within golden or green light. Devise a ritual to establish this as a special place that you can return to at a moments notice. 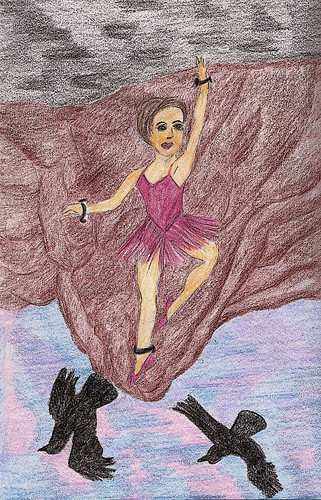 Turn the card and note that you get the most magical glimpse of the Hanged Woman is dancing for joy. She now appears all endowed, Little wonder! When one overcomes the sense of betrayal and awful

loneliness, so much a part of the suspended state, it becomes clear that this experience can give us an indestructible foundation upon which to build.