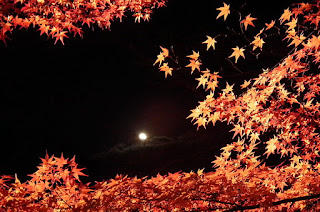 Image by 松岡明芳
Poem by Ōtagaki Rengetsu
I found this week’s poem in a beautiful little book called Lotus Moon: The Poetry of the Buddhist Nun Rengetsu, translated by the Eastern philosophy professor, John Stevens. The poet, Ōtagaki Rengetsu lived from 1791 – 1875 and was known not only for her poetry, but also for excelling at pottery, painting, calligraphy, dance, sewing, and martial arts. How lovely it is to imagine her seduced from the convent walls and out onto the lawn by by a simple, unknowing maple leaf–all that blazing color in such bright contrast to her black robes. Though she was accomplished in many fields, and no doubt a sophisticated intellect, in this poem she is as lovely, simple, and innocent as a deer drawn to a berry bush. 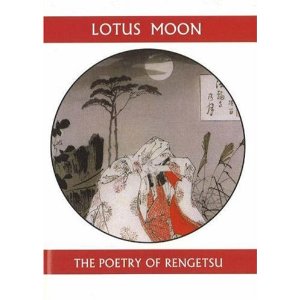 As a Nun Gazing at the Deep Colors of Autumn
by Ōtagaki Rengetsu
Translated by John Stevens
Clad in Black Robes
I should have no attractions to
The shapes and scents of this world
But how can I keep my vows
Gazing at today’s crimson maple leaves?
Original post here.