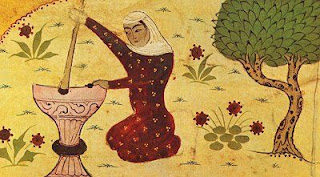 Rabia, depicted in an Islamic miniature
Image is in public domain (expired copyright)
Poem translated by Charles Upton from Persian
This week I’m still thinking about stars, but we’ve stepped back a few centuries to 717–801 C.E. to read the work of the female Muslim saint and Sufi mystic,Rabia. Rabia is often considered the most important of Sufi mystics and is credited with having introduced the concept of Divine Love, or loving God for God’s own sake, rather than out of fear. I love the raw simplicity of this poem, which so perfectly exemplifies Rabia’s life choice to remain in contemplative solitude instead of marrying. Enjoy!

O my Lord, the stars glitter

O my Lord,
the stars glitter
and the eyes of men are closed.
Kings have locked their doors
and each lover is alone with his love.

Here, I am alone with you.