The Purpose of Life is Self-Realisation, or God-Realisation.
This human body has been given to you.
This is your chance to meet the Lord of the Universe.
All Other Work you do, will not work.
Join the Saadh Sangat, the Company of the Holy; vibrate and
meditate on the Jewel of the Naam.
And, thus Realise the Truth of your Being.

WHAT DOES A GURU DO ? 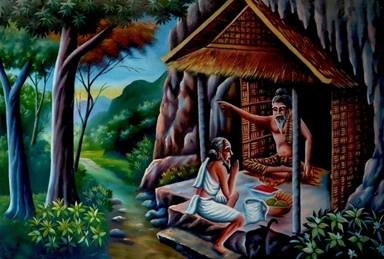 The Mind is One.
The doubting mind is the seeker.
The mind free from doubt is the Guru
‘Seeker’ and ‘Guru’
Both are only words
Words to express the state of Being
An expression of the silence of OM, also spelt AUM

O Nari, why indeed should you be afraid of the ‘words’!

What does a Guru do?

‘This’ and ‘that’ are only appearances in the light. The nature of the appearances is an ever-changing phenomenon.
Watch the constantly changing appearance. Watch this ‘this’ or ‘that’ and, by all means, enjoy the show. Just Be.

And when you ask the Questions, because the Guru’s words,  even though they send a current through you,  you feel the joy and truth of the words . And yet the reality of the words, the ‘essence’ of the words escapes you!

When you ask the Guru questions . . .
The Guru gives you the answers, for  he knows, he has ‘known’ that essence, the essence abides in him, and he himself is the ‘essence’ of the words . . . the ‘Being’ the ‘Being’ is him. Verily he know, and he answers . . .

You ask and he answers . . .  and his answers are the truth.

They are the essence, they are not the words; not just the words, for  they are Existential;  something more than words alone. They are his Being,  and you feel it. Once in a while you can feel his Being. Once in a while his words reach you,  reach your heart, your Being.
You can ‘feel’ the truth of the words,  you feel ‘light’, you feel peaceful . . . as you listen to his words; the words, the answers,  and your thirst is ignited, excited!
You become thirsty . . .

And as his words, his answer, his Being enters your Being. His answers become your answers!

You realize that you are yourself the Light,  the essence is you, you are . . . you just are ! Not ‘this’ or ‘that’, not the ever-changing this or that, but ‘THAT’, which is  the essence itself.
That ITSELF, which becomes ‘this’ or ‘that’. The Ocean, which itself rises as the wave and then subsides, the Silence, which itself becomes the word only to absorb the word again within itself!

– Excerpt from A Call from the Beyond, Volume 3, by Narinder Bhandari

NARINDER BHANDARI’S body was born on 22 November 1939, to Shrimati Premlata Bhandari. His father, Sardar Iqbal Singh, was a doctor by profession.

Nearly two years after narinder’s birth, his father was conscripted into the British Army [The British were then ruling India ], and sent abroad to Iraq.

He seved in Iraq, Iran, and other countries in the Middle East, looking after the wounded and the sick, with uncanny dedication. An attribute that was to greatly influence young narinder, sowing the seeds of Spiritualism.

A second son was born to Premlata on 29 Oct 1941, a month after Dr Iqbal Singh left India.

He returned to India in June 1944, and saw his second son for the first time.

Premlata took good care to teach the children about Religion during the absence of her husband, and further sowed the seeds of Spiritualism in them both.

Lt Col Narinder Bhandari, now 76, lives in Chandigarh, INDIA with his wife Ravi, son Karan and family, having retired from the Indian Army in 1990.

The greatest ‘happening’ in his lifetime, says he, was “The Death of Time for one single Moment in 1982; a gift of his  Guru, God and Meditation. Past and Future ceased to exist. Life became a spontaneous living in the Light of awareness of the present Moment.

Of that experience, narinder expresses in the following words:
The  Death  of Time is the Death of the Mind.
The ensuing Silence is TOTAL.

That Silence, sudden-like, becomes a soundv . . . a Sound that is itself Light . . . or is it the other way around.

The darkness of Mind, in throes of death, gives Birth to a Light so dazzling that the eyes close in ecstasy . . . and in the ears rings the Music of the following words:

“Anand bhaya meri Mayee, Satguru mein Paya”
(Bliss, O my Beloved mother,The Satguru has removed the veil between HIM and Me,to reveal Himself to me!)

Ah, BLISS, truly has become My Being!
narinder , now, is the Satguru’s disciple!)
Ah, how the Music resonates!!!

Poetry began to arise in my Consciousness in 1998.

As for the use of a capital letter for the names narinder and Nari in my writings, I use a small ‘n’ for narinder, signifying Humility of an un-awakened narinder; and, I use a capital ‘N’ in Nari, to indicate that Nari stands for an awakened narinder…

The small n and the Capital N distinguish the state of Mind . . .

Excerpt from LANGUAGE by Doug Anderson

Excerpt from No Name by Penny Harter

Excerpt from Island by Katherine Soniat

Excerpt from LANGUAGE by Doug Anderson

December 29, 2021 0
This poem appears in our Autumn/Winter 2021 issue. Subscribe today to receive the entire issue or purchase it in digital format. The way the starlings are swirling together, spiraling, then...

Excerpt from No Name by Penny Harter

December 9, 2021 0
This poem appears in our Autumn/Winter 2021 issue. Subscribe today to receive the entire issue or purchase it in digital format. This morning I want...

Excerpt from Island by Katherine Soniat

October 27, 2021 0
This poem appears in our upcoming Autumn/Winter 2021 issue. Subscribe today to receive the entire issue once available. My son cares for his own first...