I had been in Rwanda for a month, tracing the footsteps of the genocide in the ten thousand hills. This was my last morning, alone in the genocide museum near Kigali. The perfect place to reflect on all I had seen. At the end of the hall there was an alcove room lit only by a smattering of sunlight. I stopped short, met by the smack of larger than life, black-and-white photos on the walls.

A boy with wild curls smiled at me from a sandbox, waving a red shovel. “Look at me!” he demands. I imagined his father standing on the other side of the lens, laughing and encouraging his precocious son. My chest ached with a sick knowing, even before my gaze dropped to the epitaph:

Cause of death: Whacked by a machete

The low hum of conversation in the garden outside floated through the window, like a mournful hymn. Tears slid down my cheeks, images of the past month clicking through my mind. The church with bullet holes in the ceiling, a blood-stained Mother Mary on the wall. The pristine Virunga Mountains where I had played with young gorillas who were likely to be shot by poachers before reaching adulthood. A shantytown where a young mother with blank eyes told me that she still believed in God but not justice.

A young woman who I will always think of as a girl stepped out of the shadows; or perhaps she had been standing behind me, following me, for a long time. I recognized her from earlier: jeans and a striped t-shirt, she could have been any African teenager. She had smiled shyly at me in the garden, and I took note of her old-soul brown eyes. She was, in a way, ageless. Now, she was looking at me, waiting, as if she had already asked a question. Her dark eyes were wide with something like fear, her voice eerily calm. “Madame,” she said, “will you be my mother?”

The question was a jolt to my system. I fumbled in my purse for something – anything. I couldn’t answer, couldn’t look at the girl or the photos on the wall.

Yes, of course. This is what I wanted to say, but there was too much in the way. My mom’s shaky confession that after my sister died, she couldn’t love her remaining three young children. The depression that stood between me and my own two sons. The unresolved grief that had brought me to Rwanda, to interview genocide survivors.

Eight years later, that moment when I turned away a girl who was, most likely, simply looking for comfort, still haunts me. What if I had found the courage to answer yes? I imagine how that small breath of compassion might have connected me with a stranger; changed me. Changed her.

Eight years later, I am still trying to say yes in big and small ways. 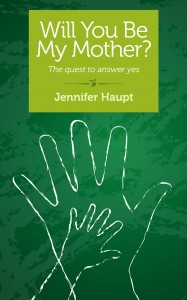 Jennifer Haupt contributes to a wide variety of magazines. Her new e-book “Will you be my Mother? The quest to answer yes,” includes three stories from her journey to love better and connect more deeply with her children, her mother, and the world. Author profits from this mini-memoir through May 2014 will be donated to mothers2mothers, which trains, employs, and empowers mothers living with HIV/AIDS in Africa. For more information about Jennifer, visit her website or Facebook page, or blog for Psychology Today, One True Thing.