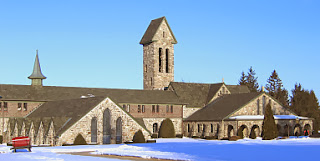 Walking through this field among a stand of old prairie oaks on a raw December day, I taste that experience again, where my own awareness and the space over the frosted alfalfa are one and the same clarity…

The stark beauty of negative space patterns the mosaic of branches and twigs, receding into infinite gray, resonant with invisible stars; and this space is my own pure consciousness. Within me and without me, the same expanse,  the whole planet poised in my own self-luminous mind…

And in the depths of this paradox, the same question haunts me as it did when the experience first dawned over 40 years ago in that meadow near my home outside Philadelphia, on the rolling dales of Chester County, Pennsylvania: Whose awareness? Mine or God’s?

This singular momentous Now of consciousness has not changed, has not become a new moment, in over 40 years; perhaps not in a thousand years. Perhaps I tasted this crystaled transparency at some Cistercian Abbey in medieval France on a cold Winter afternoon like this one, walking, walking silently. Solvitur ambulando, said Augustine: “it is solved by walking.”

I was a college student home for the holiday, chopping wood at the edge of the pasture, suddenly stunned by the clarity, the emptiness, the boundless transparency of pure awareness, glowing from its own groundless depth with a soft pearl light. I had to stop work and sink to my knees, giving thanks. But to whom, and with what words? I had no prayer to contain this silence, which I now call simply Presence. And I had no one to pray to, because this unfathomable Otherness was my own Self.

No tradition could console me with an explanation of this marvelous space that held the whole earth like a green jewel in an endless moment of glittering emptiness. After much searching, I finally found something like it in the writings of J. Krishnamurti. Years later I would find it in Eckhart Tolle, Thich Nhat Hanh, and the breath of the Master, Sri Sri Ravi Shankar; but in the early ’70’s I was alone.

I had been doing Transcendental Meditation for five years. I knew that it was this meditation practice that had opened me up and spilled me into the universe. And I knew, by the grace of my teacher, Maharishi Mahesh Yogi, with whom I had personally studied, that this afternoon benediction over the Pennsylvania meadow was my own pure consciousness. For that is the promise and fulfillment of the teaching: with regular daily practice of Transcendental Meditation, the clear light of awareness will not only illuminate the silence of meditation, but the world around us, pervading trees and hills, clouds and stars… But that is all just an explanation, a series of thoughts in the intellect. And the intellect is so superficial, so puny, compared to the diamond solidity of pure consciousness.

Yet there’s the rub! Nothing more abstract, nothing more no-thing, than pure consciousness. Yet when awareness dawns, nothing is more concrete! One finally has the courage to refer to no authority but one’s Self. This silent explosion of Self-referral irradiates the universe, dissolving the mirage of the world into the ineluctable eye that sees, revealing this un-created abstractness to be more dazzling and tangible than any material object seen. Chitta Mani: jewel of awareness! All sparkling creatures suspended in the singularity of the diamond Self.

I had received this gift from the master, Mahesh; but as a product of my culture, I needed some confirmation from my own heritage. Because I am a Westerner, the only cure I could find for this poignant crystal arrowhead in my heart, bleeding light over the Winter fields that Advent season when the Presence first stunned me, was the Christian mystical tradition. I was not even a Catholic, but I left home and went to a Trappist Monastery. There, at St. Joseph’s Abbey in Massachusetts, I met Dom Thomas Keating and Fa. Basil Pennington, two great Christian contemplatives who were also practitioners of Transcendental Meditation. They had bravely integrated this ancient Vedic wisdom into their Christianity. So I spent many months there, learning from their tradition as they absorbed the wisdom of the Vedic rishis. What sublime spiritual commerce and exchange!
It was a miraculous time, the kiss of East and West, and it was during those days that Dom Thomas and Fa. Basil first developed the steps of Centering Prayer, which was to become an important meditation movement in the Western Church. I remember sitting with Dom Thomas in his office, which was small and humble despite the fact that he was Abbot of the monastery. We discussed our meditation practice. He said to me, “The future of Christianity depends on whether we can integrate this into the Western tradition…” He believed that the early Church had established Christianity  on the contemplative experience of Presence, but over the centuries, dogma buried it.

I realized while chanting in the choir at the Abbey, walking in the cloister at dawn, and working on the monastery farm, that the Benedictine call to “pray and work” – ora et labora – was precisely the same teaching that Maharishi had given modern seekers: “meditate and act.” This integration is the essence of the Bhagavad Gita. In chapter 2, verse 48, Krishna tells the warrior, Arjuna, Yogastah karukarmani: “With your mind established in yoga, the state of pure unbounded awareness, perform action.”

Through combining vigorous daily work with periods of regular meditation, we integrate action and contemplation into one unified field of energy. Then we truly see: all activity arises in silence, and silence pervades all action. The clarity of pure awareness infuses our work. Finally, we directly perceive the space outside and the space inside to be one continuum, made of consciousness, for all energy, material or spiritual, is the same stuff. The matter of the earth is suffused and glowing with mother-of-pearl, the light of bliss, softly billowing from the emptiness of the void, which is not a lifeless void, but the living womb of awareness. And it is your own Self who shines from the heart of every atom…

The work of the monk blesses and heals the earth with each hoe’s stroke in the garden, each drop of seed in furrow. Simply by being conscious in the midst of work, the contemplative envelopes the creatures around her in blessedness.

Yet I realized that Christian contemplatives desperately need to hang their experience of Presence onto the past, in an attempt to ground their consciousness in the story of Jesus. Any “religious” man or woman in whom the experience of God dawns will be haunted by guilt unless he or she can somehow relate it to the doctrines they’ve been taught.

As far as I could tell, this is how the Christian contemplative does it: The death of the egoic mind is the death of Jesus. In Transcendental Meditation, as in the Christian mystical experience, individual mind dissolves, is crucified, and resurrected as boundless awareness. But in that very boundlessness, ego must perish.

Our experience recapitulates the story of Jesus again and again, with each breath. Jesus dies and Jesus is re-birthed each moment, Light born from the womb of inner silence. Jesus represents the small “I,” Christ is the “Am” of limitless being. Our contemplative life is the death of the “I” into the bliss of the “Am.”

When we begin to live this experience not only in meditation, but through daily action, the Inner Light spills from within us, through our senses, into the world. Then we redeem the earth with every consecrated act of perception: tasting, touching, hearing, seeing Christ in all creation. Here is the divine sensuality of Jesus who said, “Take eat, this is my body,” or the Hebrew psalmist who sang, “Taste and see that the Lord is sweet!”

The monks practiced deep meditation in their Offices of morning and evening prayer, then suffused their silence into the world through humble manual work, pouring heaven into earth, breathing Spirit into matter.

All great religions represent this process through their symbols and rituals. All religious stories are, in the final analysis, the story of our own enlightenment. As long as we choose to load our experience of Presence with the baggage of an old religious story, whether it is the story of Buddha, Krishna, Mohammed, Moses or Jesus, we can. And if we choose, we can spend lifetimes anchoring the present to the past…

But at some point we gently relinquish the religion of history, choosing quite simply to bathe in the splendor of Now. Then our religion is freed from the bondage of dogma, and it becomes a lovely poem. We can cherish the rituals, chants and stories as reflections of a Light that we constantly behold, shadows of a Life we perpetually breathe. For all religions symbolize the surrender of the ego to the mystery of unfathomable Presence.

Therefor, O my soul, standing in the windswept meadow, do not ask, “Is this God or my Self?” Allow the paradox of Presence to dissolve two into one and one into two. Let Pure Awareness descend upon these December fields, woods of oak and cedar, hills drifting cloud-like to white peaks in the boundless distance of a starry evening, all creation pressed from the crystal solstice of the birth of light. Let your silence be a Gregorian chant over the earth, each breath a Kyrie.