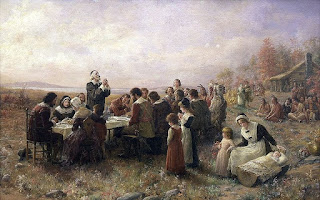 The First Thanksgiving at Plymouth
by Jennie A. Brownscombe
This week for Mnemosyne I’ve selected, “Te Deum,” a simple little poem of praise in honor of Thanksgiving. The poet, Charles Reznikoff  lived from 1894 – 1976 and was an objectivist, which means he was part of a group of second-generation Modernists whose tenets were to treat the poem as an object, and to emphasize the poet’s clear view of the world, intelligence, and sincerity.
In case you’re not familiar with the term “Te Deum,” it’s an early Christian hymn of praise. The title is taken from the opening Latin words, “Te Deum laudamus,” or “Thee, O God, we praise.”
I’m attracted to this poem because of the humility and gratitude of the speaker and because it’s a perfect poem for reciting at the table.
I hope some of you choose to memorize it with me this week, and I wish you all a wonderful Thanksgiving! Not because of victories

I sing,
having none,
but for the common sunshine,
the breeze,
the largess of the spring.
Not for victory
but for the day’s work done
as well as I was able;
not for a seat upon the dais
but at the common table.http://melissastuddard.blogspot.com/2012/11/the-mnemosyne-weekly-poem-thirty-seven.html

Faith is like a Shimmering Veil – by Jane Beal